Gregory Büttner lives and works as a musician and artist in Hamburg. Since 2000 his main focus is on sound art and electroacoustic compositions. He performed at several festivals and concert series in Europe, China and Chile, composed music for dance and performance, radio, video and sound installations. In 2004 he launched his label 1000füssler which releases experimental music in small editions.


“In 1999 I began to work with audio information besides the visual ones. The computer provides the possibility to cut up noises, sounds and music, to analyse them and work with these fragments. I am especially interested in conditions under which they come into being, in which context they exist and what kind of effect they have on the listener. My work begins with searching, finding, or producing of acoustic material. By experimenting with this I get various acoustic fragments, which are later combined in a composition, improvisation or sound installation. This results are created in interaction with the structure of the noises and sounds. Interaction is meant as an adaptation of the composition to the structure (dynamics, timbre, pitch, tune) of the sounds and noises or the other way round the sounds are changed for compositional decisions.
In my visual work I use the same method. So I usually use found images or situations as a starting point.“ 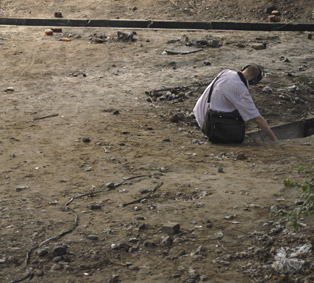